I was so excited recently as I had a rare opportunity to get out and paint plein air. Not only that but I had in mind a view that I’ve long admired. Furthermore I felt I was riding the crest of a watercolour wave that could see me overcome any challenge (except perhaps that of people, animals and city-scapes!). I was on location by 7.30am on a bright but chilly morning. I was brimming with anticipation and expectation.

Here’s the scene – not necessarily idyllic (and I’d first seen this view in winter, when it looked much less verdant) but I thought I could definitely do something with the silhouette of the fence and fallen tree. 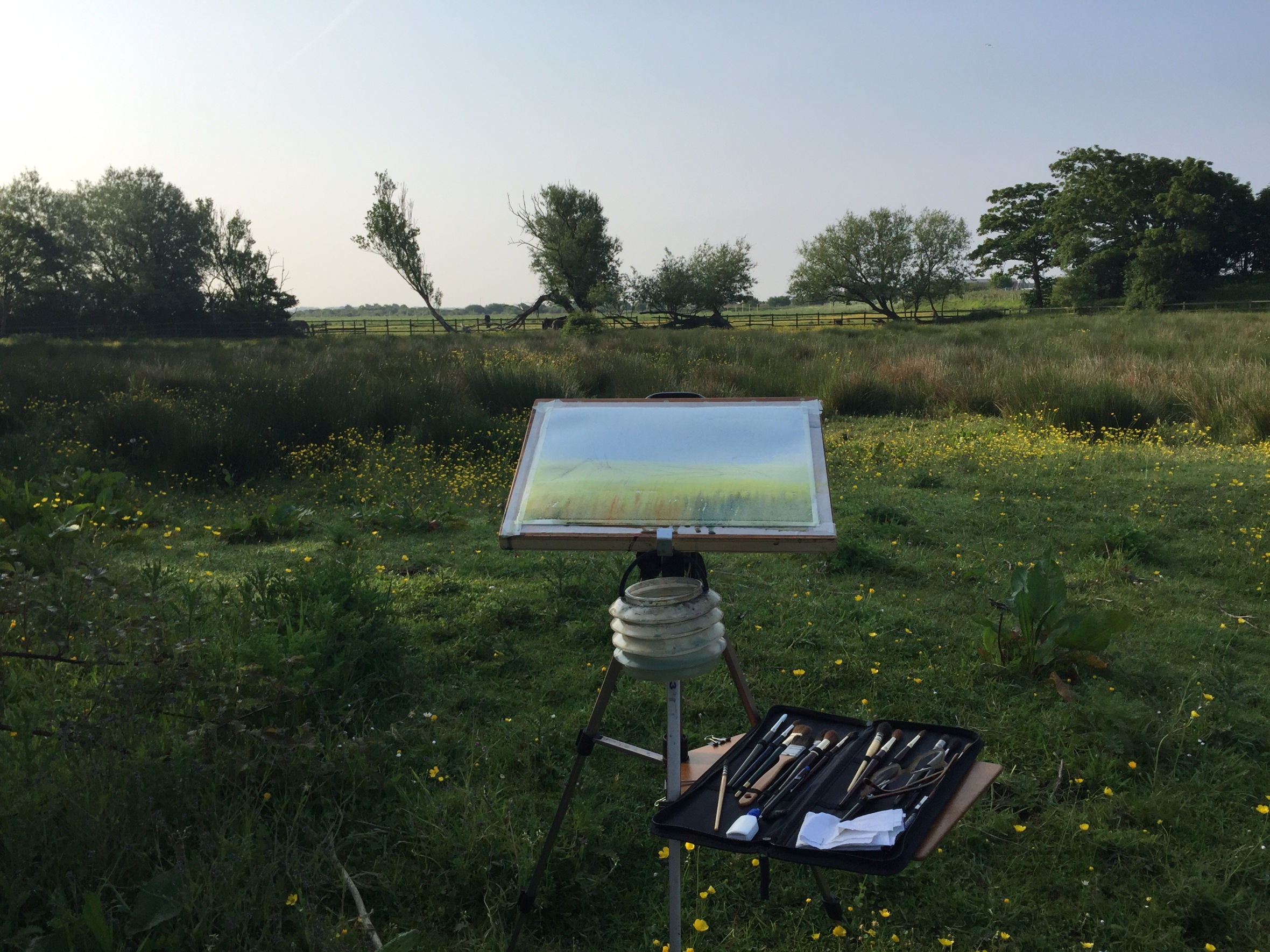 I used my viewfinder to narrow down the view – only had chance to use this on a couple of occasions but it’s a really useful tool. Here’s a clearer sense of what I was focussing on:

I was completely unprepared for what happened next. I made a complete and utter hash of two attempts. I don’t just mean they weren’t very good. They were simply appalling. So much so, I can’t even bring myself to share them with you. With the benefit of hindsight, I think I can pinpoint why this happened, but I wasn’t at all prepared for quite how deflating an experience this was. It completely knocked the watercolour wind out of my sails.

So, here’s my autopsy. It’s probably not completely comprehensive but it’s more than enough for me to try to take on board for next time!

Having had such a chastening experience, I subsequently sought comfort indoors with something a little more familiar and did a quick pencil sketch and a couple of paintings based on something from my Aubrey Phillip’s book. Nothing much that I want to say about these – which I this says quite enough about my view of them. I think they were an essential part of my rehabilitation following a bad experience – the doing was far more important that the result.

After a few days I began to feel a little better. Better enough to dip into my Edward Seago bible for inspiration – and to select his marvelous watercolour: ‘After Storm, St. Benet’s Abbey’ – a beautifully rich painting achieved with startling economy.

As I’m trying to do increasingly now, I started with a quickish sketch of the scene:

Followed by take one:

I like aspects of both of these images however, overall, think that version two is the most ‘complete’ image. I missed out (accidentally/carelessly) the sail crossing the horizon line in my first effort and I think it’s really important. I do however like elements of the foreground. In the second version, the dark tower structure and treeline to the right are too dark/dense. I also can’t say that I’m completely convinced by the cows in either of them (the cows are supposedly the brown and white bits to the right of arch!).

Both of them are still ‘overworked’ compared to economy of the original but, after the painting week I’d had, I was pleased to end it with a couple of respectable efforts.