The last time I tackled this subject, it resulted in one of my personal favourites of 2016. Already at the back of my mind in 2017 is the need to have a sufficiently strong selection of images ready from for when I exhibit in May. I know that May is still a long time away, but I also know that my output of exhibition quality work isn’t what could be described as prolific, and May is likely to come around pretty quickly!

These two factors led me back to my reference photographs of Le Pont Alexandre III that I took last autumn. The 10 minutes that I spent photographing the view as we crossed this fabulous bridge has provided me with an amazing wealth of subject matter.

I think I managed to achieve all of these things but not necessarily as I’d hoped!

In one way I’d have liked to get a little more strength in the sky, but I think it does serve to create a hazier and more diffused light, which also follows through into the warmer and slightly softer shadows than in the first painting. It’s basically the same scene but on an entirely different day. I also wanted to introduce more colour, so I did an initial wash of burnt sienna and light red over all of the tarmacked areas. This was followed by a wash of neutral tint mixed with cerulean blue. I initially went in too strong with this but, whilst it was still wet, flooded it to dilute and soften it, but went too far, so then had to add in more of the neutral and blue mix. Eventually, the paper was so completely saturated that I just had to go away and leave it alone for an age to dry out. Luckily, the way it turned out seemed to work well with the sky so I was then able to press on.

The figures are, on the whole okay-ish. I count a total of 15 people in this painting which I think makes it my most populated painting to date! I did, however, encounter some difficulties the scale of some of them. The group of three to the left were first done far too short, compared to the couple on the opposite side. I only really saw this after I’d thought I’d finished so I needed to go back and give each of them an extra couple of feet in height, change all their shadows and try to remove some of the first set of shadows!

I did manage to approach this painting with a greater sense of freedom than I did the first, but this was probably as much to do with familiarity with the subject having already painted it once.

I’ve put the two side by side below, but this is more for the sake of interest than for which ‘is best’. I think they’re two different paintings on two different days of the same scene, and both have their merits (and their pitfalls!) 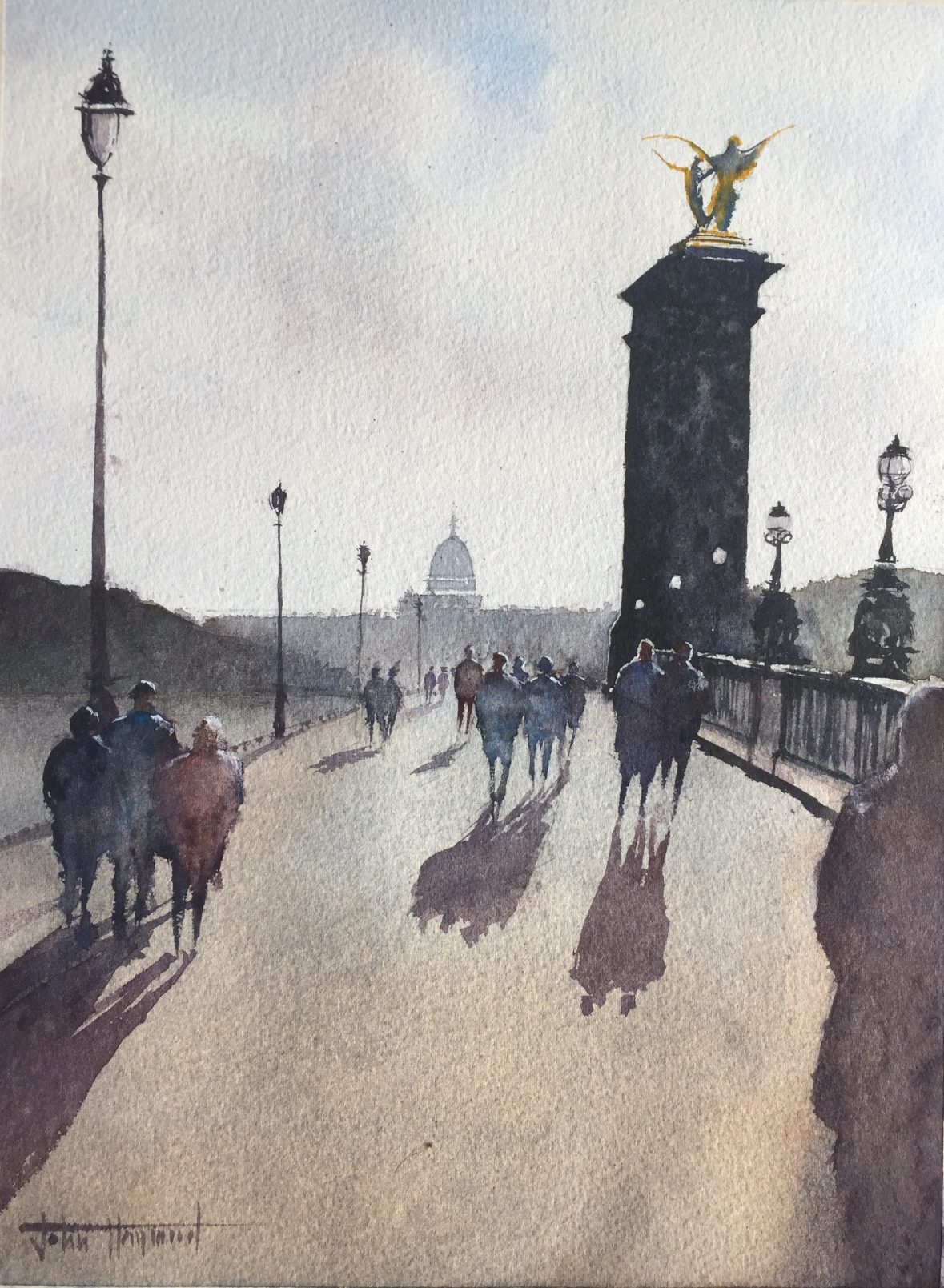 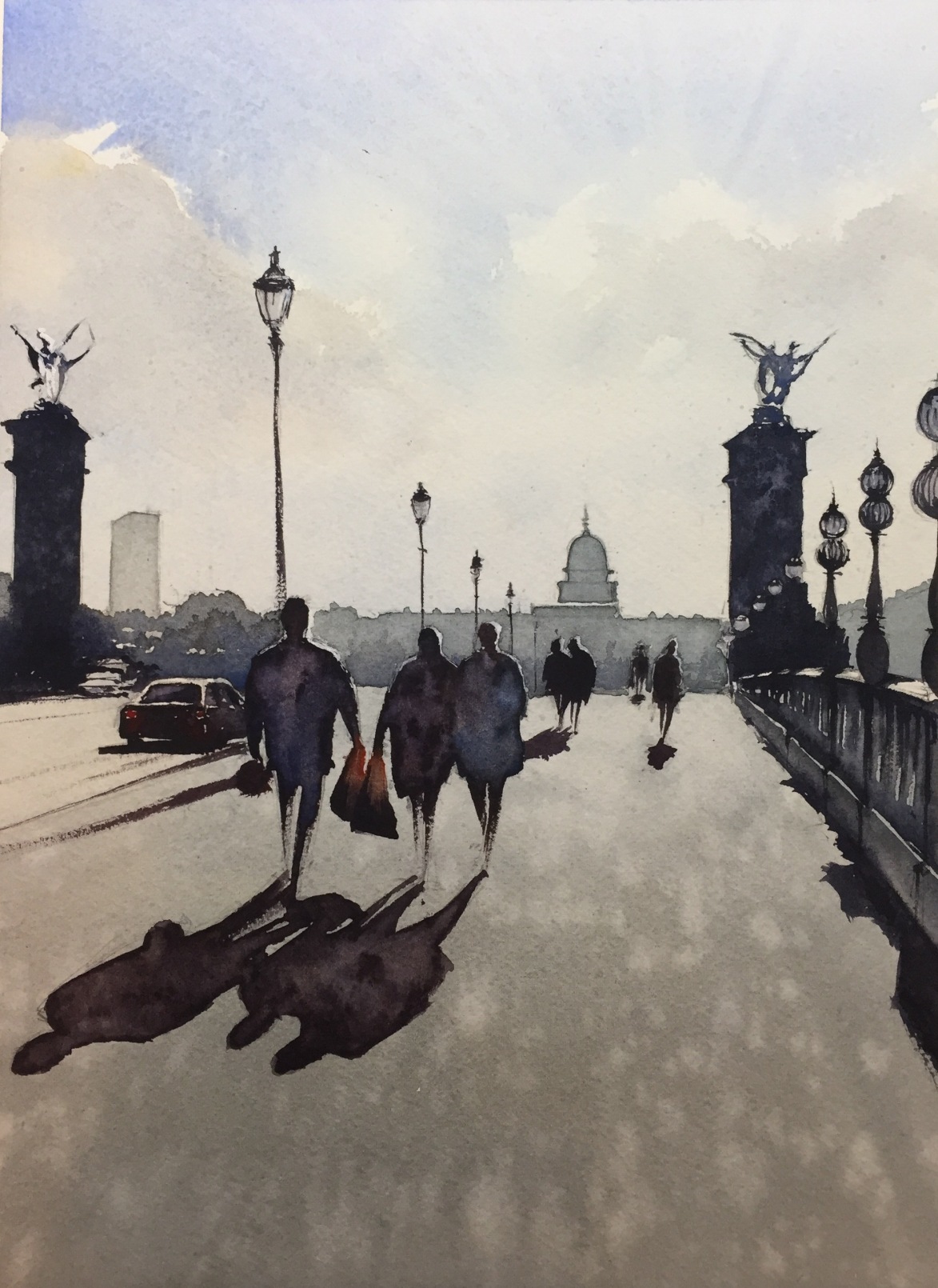 If you were to dangle me off Le Pont Alexandre III bridge and threaten to drop me in unless I made a choice, I’d probably opt for the first one. Not necessarily because it’s better, but – and here’s my hugely subjective bias – because it was accompanied by a much greater sense of epiphany or revelation. Painting this felt like a really clear signpost to the direction I want to take my painting.

Actually, after looking at these two again, I see that my attempt to correct the figures on the left of the painting still weren’t sufficient. They’re still far too short – making the pavement on the left look as if it’s a different height to the pavement and figures on the right! Now that I’ve seen this, I find it difficult to see anything else!

Nothing for it but a bit of surgery! Here’s another crop. The composition isn’t as strong or well balanced, but I think it still works and at least I’m not distracted by the out of proportion figures!

Typical really, just when I thought I was happy with this… I’m now far less happy.

I’m reminded of the DIY mantra, ‘measure twice, cut once’ – I need to apply the same to my initial sketch which is what led to the this painting’s demise!  I do still like this crop – but deep down I also know that I’ll probably be coming back to the view again very soon!