I left last week’s post broadly satisfied with my sketch of a Notre-Dame side street, although slightly bemoaning that I didn’t think that the sky matched the rest of the painting. This began to niggle me to such a point that I felt I had nothing to lose by trying to correct this. I thought that be throwing a pale blue wash over the sky area, it would create a better / more appropriate play of light, and would better match the shadows, especially of the figures. Well, I’ll leave to others to decide but from my own perspective… I don’t know if it was just the wrong blue, the wrong tone, poor application or I just wasn’t in the right frame of mind but it just doesn’t look at all as it should!

Below are the two versions, the one of the left was my grey sky starting point… the one on the right, after I’d blue-d the sky. It may not exactly have ruined it, but I find it very difficult to look at it now without obsessing about the weird looking sky!

I was quite disappointed with this outcome as I did like lots of elements in this painting, and I now find it a little uncomfortable to look at it! 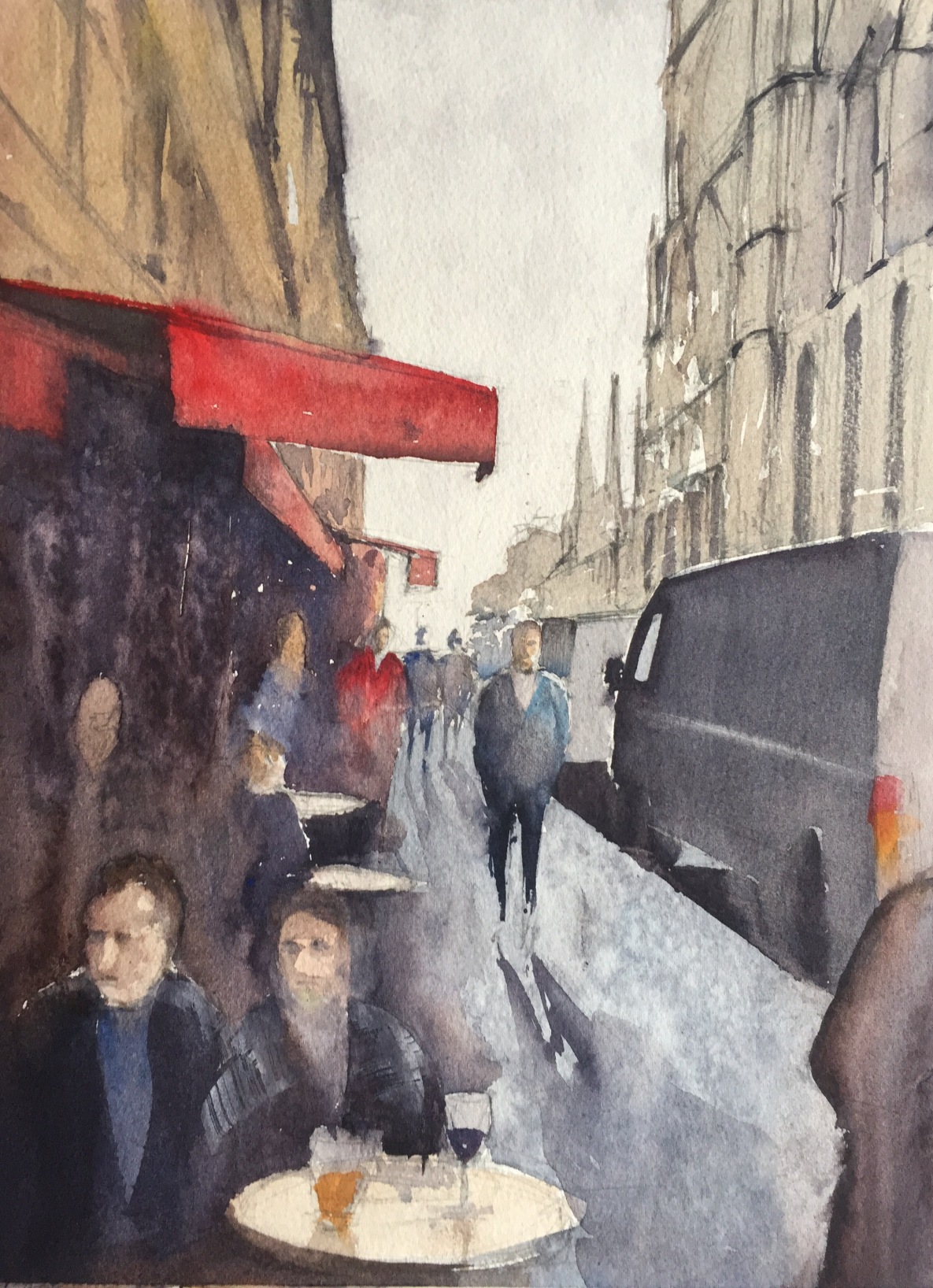 Side street near Notre-Dame, Paris

With a blue sky

On an entirely different note, I had to supply some text and images last week to go onto the website for the exhibition that I’ll be participating in later this year. There’ll be much more information about this to come and, it’s not especially relevant to this post except that it made me realise that I used to mainly paint landscapes, but more recently I’ve found myself focusing on on urban scenes. As I’ve said that I’ll exhibit a mixture of landscapes and cityscapes – hence the ‘Town and Country’ title of this post – I thought I ought to try my hand at a landscape painting as it feels like a very long time since I last tackled one.

On our way back through France last year my nearest and dearest, kindly started to take photographs for me as we hurtled along the French autoroutes of little villages and farmsteads that we passed. The results of these were, as might be expected when trying to photograph at speed, more miss than hit, but there were a few views that I thought may have some potential. The first one to take my fancy was of a collection of farm buildings on a hillside with the sun falling onto them. I also particularly liked the range of poplar trees (at least I think they’re poplar trees!) that seem so characterstic of France and provided a really nice set of vertical shapes. I was, as ever, a little pushed for time and, as I still wasn’t completely convinced by the subject matter, I rather dashed off the sketch below.

I wasn’t particularly happy with composition of this, nor some of the handling – particularly where I’d gone in far too dark and ‘killed’ off large areas of the painting and overworked other areas. I also need to apologise to bovines everywhere!  Yep, those black and white ‘things’ in the mid ground are supposed to be cows! Definitely need to add cows to my long list of things to learn to paint!

I did however think it showed some potential as a subject so thought it might be worth another effort.

My first painting was done on a quarter imperial sized sheet but I thought I could adjust both the scale and proportions, and leave more more space for a more free application of paint, by going up to a half imperial size sheet and perhaps cropping it into long landscape format.

I painted this version quite late at night, and without using my ‘daylight’ light which, in retrospect, was both impetuous and inadvisable!  (Terms that could so aptly be applied to so many decisions I’ve made in life!)

This second attempt repeats many of the mistakes of the first painting, which is really frustrating but again, whilst this painting didn’t realise it, I still felt the subject had potential. After painting this effort, I was reading one of my many watercolour manuals and a particular mantra struck a chord deep within! It was along the lines of “Always work from light to dark – don’t ever, under any circumstances, skip ahead”.

Now I know that there are exceptions to every rule, but this made me realise that I’d been guilty of making a very basic, fundamental error. In each of these two efforts, I started by washing in the sky, after which I laid in the foreground wash. I then added in the poplar trees (in my mind, this was working from back to front, from distant to near). What I’d also done however, was go in far too strong with these background trees, which left very little scope for any successful tonal variation elsewhere in the painting. I’d started far too dark in the distance, which meant the only direction I could go in elsewhere as I moved towards the mid and foreground, was even darker! After painting the trees in, I then started with the massed trees, cutting around the sunlit elements as I went, and then just started jumping around between lights and darks depending on what seemed dry, or whatever took my fancy as I went along.

Again this disjointed approach only served to re-enforce the tonal errors that I’d already introduced. It was frustrating because it’s such a basic principle, especially in watercolour, but I’d failed to recognise my own error.

In a desperate effort to get another version done in time for this post, I sketched out the scene all over again and, painting at night but this time using my daylight lamp, I started afresh! I laid in the wash for the sky (I was aiming for a seamlessly graduated wash that got lighter towards the horizon, but ended up with it looking just a little bit stripey!).

The foreground fields went in next, and went in very wet. I kept adding to this wash, as it started off a bit too bright green so it needed to be subdued a little. As with the previous paintings, I tried to add in some texture and movement into this large expanse by splashing some water over it, and by using a water spray. I’ve been doing this quite a bit recently to varying degrees of success – mainly depending on me getting the timing just right. With this painting, if anything the paper was a little too wet when I did this so everything just kept on merging together, rather than leaving distinct marks. It still works however as an effective way of breaking up large areas and adding a variety of texture and movement. (I’ve also found this can also work well in darker areas of shadow too.)

By the time I’d done this the sky was dry and ready for me to start on the trees. Heading my mantra, I went in quite pale with these, part dragging part rolling the side of the brush on the paper. Straight away they felt distant compared to my previous attempts. Next I identified the lightest tones in the buildings – mainly the sunlit roofs – and added these in. I was then able to build up more gradually the values in the background trees and the shadows in-between and on the buildings.

I think the end result is much more pleasing, well balanced and, quite honestly, just a better painting all round! I’m still kicking myself for having to read it in book to realise the error of my ways, but also pleased that I was able to rectify it, and that the improvements should be so distinctinctly noticeable!

2 thoughts on “﻿Town and Country”